With reporting from Alexander Dias and John Ochoa.

We’ve been waiting for this weekend since we first announced Middlelands last year, and its much-anticipated debut went absolutely off. At Insomniac, we celebrate imagination, creativity, music, and arts, and Middlelands, our all-new festival experience, combines all these principles into one fantastical journey.

Hosted at the stunningly beautiful Texas Renaissance Festival Fair Grounds in Todd Mission, TX, Middlelands combines the fantasy worlds of the Renaissance age with contemporary rave culture to create a one-of-a-kind music and camping experience where medieval imagination meets modern-day festival life. Spread across more than 200 picturesque acres of lush fields and tree-lined grounds, Middlelands lifts you through time to a historic age via period-specific architecture and aesthetics, authentic local vendors, and decked-out performers in a fully immersive environment.

This past weekend, Middlelands debuted in full fashion with proper music, great costumes, awesome people and good vibes. From dragons and wizards to knights and princesses, our inaugural Middlelands went down as a true adventure for the ages.

Here are a few of our favorite things and moments from the first-ever Middlelands.

Kicking Things Off at the Official Camping Pre-Party 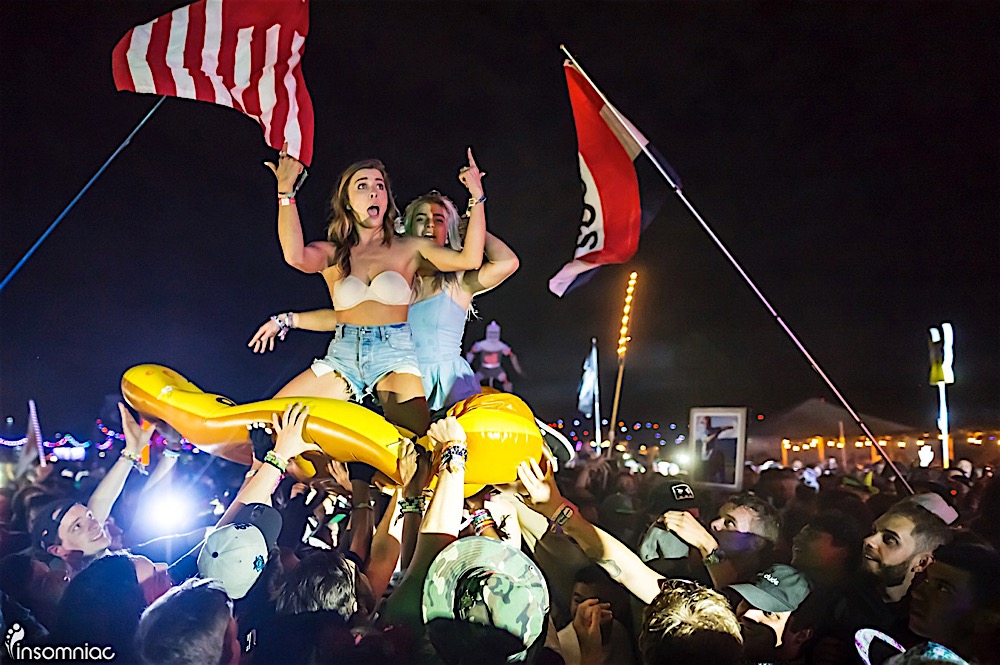 As if three full days of camping vibes and live music weren’t enough, we kicked things off right with our camping pre-party the Thursday night before the festival gates officially opened. And in true Insomniac fashion, we went hard AF. Presented by our headbanging sister brand, Bassrush, the kickoff hosted a stacked lineup of heavy-hitters—12th Planet, Crizzly, Space Jesus, Tim Gunter, Carlyle and Madhatter—at the official Insomniac sound camp at Conqueror’s Court. We all know the success of any party fully relies on the vibes, and good vibes were aplenty all around Conqueror’s Court, as Headliners danced till the early morning hours in full costumes, neon lights, and fuzzy onesies. The stage itself was decked out with an impressive audiovisual setup to rival the stages within Middlelands; it was like a festival within a festival, exclusively for the weekend warrior campers. Nothing sets the mood for a packed festival weekend like a good, old-fashioned pre-party. —John Ochoa 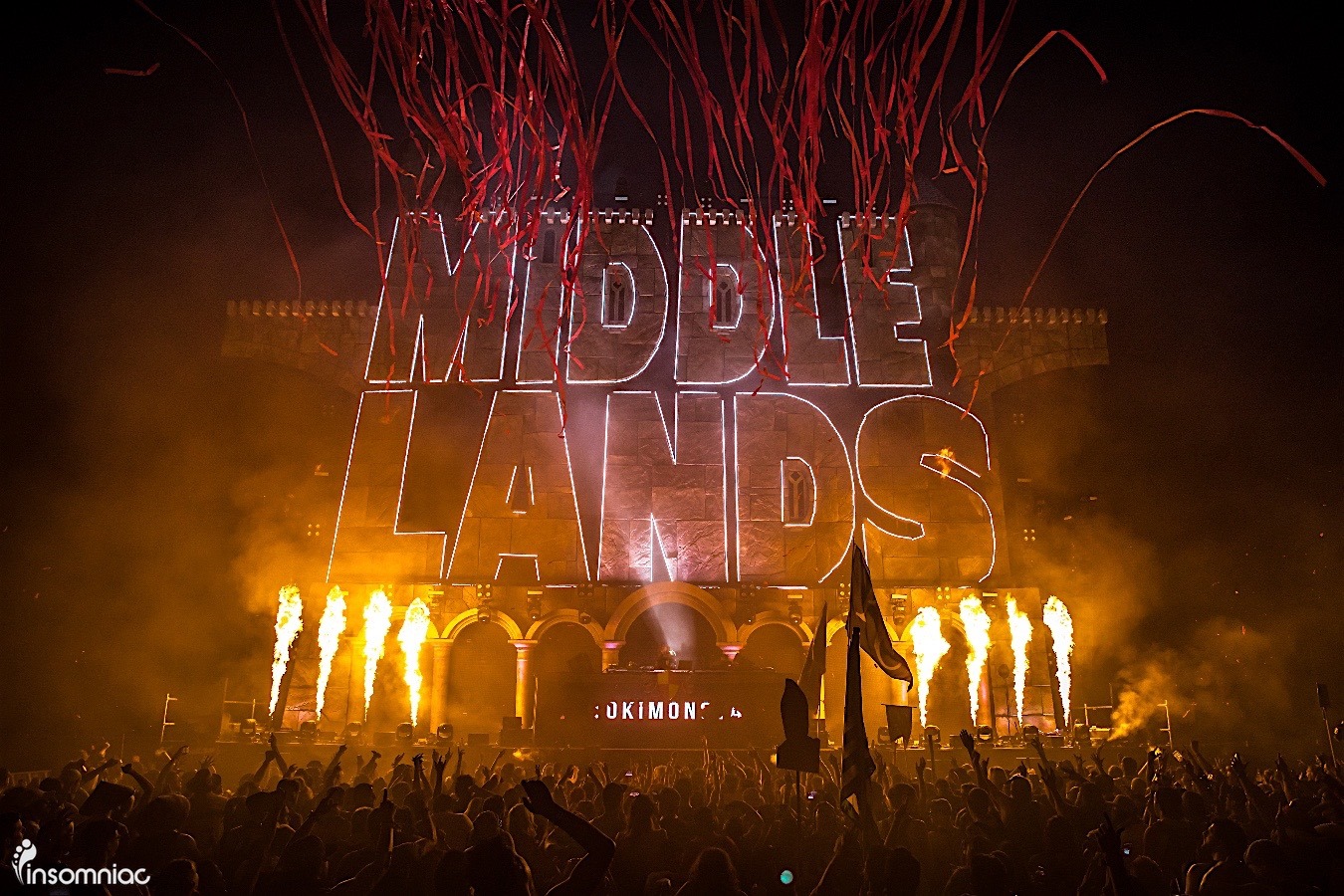 There are hardly enough words in ye olde English language to describe this behemoth of a stage. The spectacle of it alone was enough to drop jaws all around. Packed with monster sets from Getter, Slander, Snails, and more, Middlelands Arena served as the de facto capital of the festival. —John Ochoa

Nonstop Dancing at the Sound Camps and After-Parties 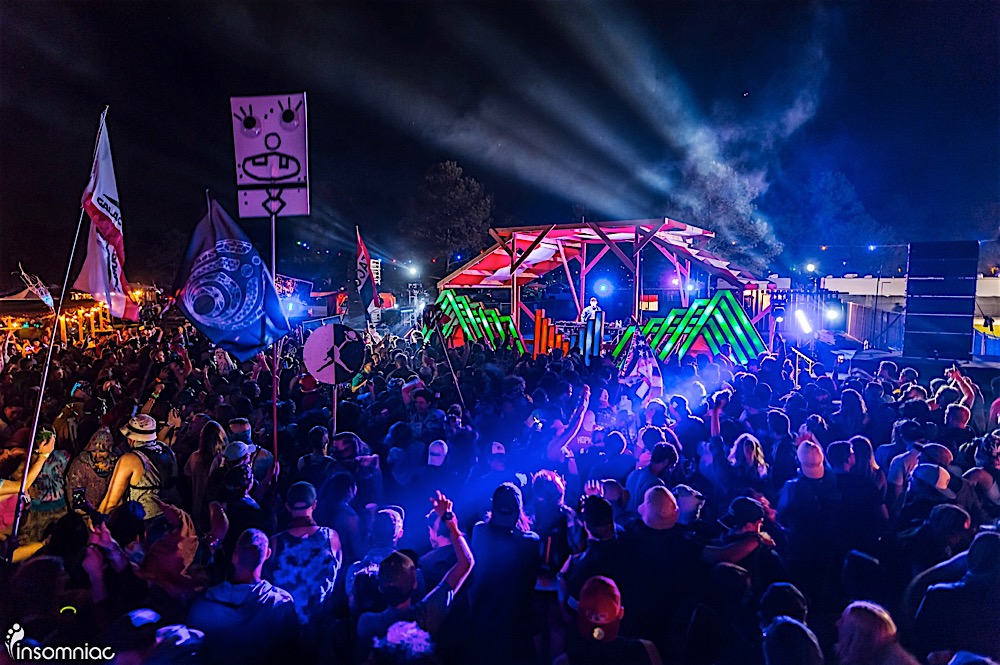 The party kept going each night, long after the last beat dropped on the festival stages. Conqueror’s Court was the site of Insomniac’s official sound camp, which went off with a stacked lineup of special guests, like Saturday’s extra gooey What So Not b2b Quix set. The thousands of Headliners who ventured deeper into the Middlelands kingdom discovered 11 elaborately themed sound camps, imagined and executed by an amazing group of music-lovers. The music was diverse, the vibes were thick, and the bass was crackin’. With lineups that included local heroes and surprise sets from Middlelands artists, the sound camps went until the the morning hours. —Alexander Dias

Secret Shows at the Globe Theater 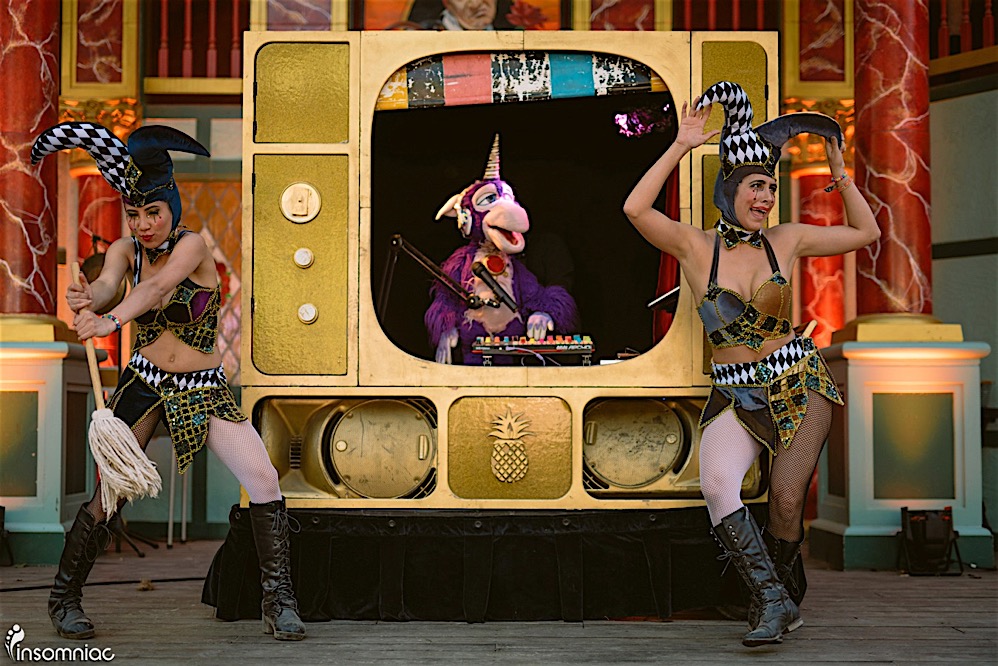 Nestled in the trees on the road to the Stronghold, the Globe Theatre—named after the stage that made Shakespeare famous—was a nonstop variety show featuring jugglers, dancing wenches, magicians, and the funniest hip-hop puppet show you’ve ever seen. The small amphitheatre offered plenty of chances to get off your feet and participate in the vaudeville-meets-Ren-faire atmosphere that the performers created. —Alexander Dias 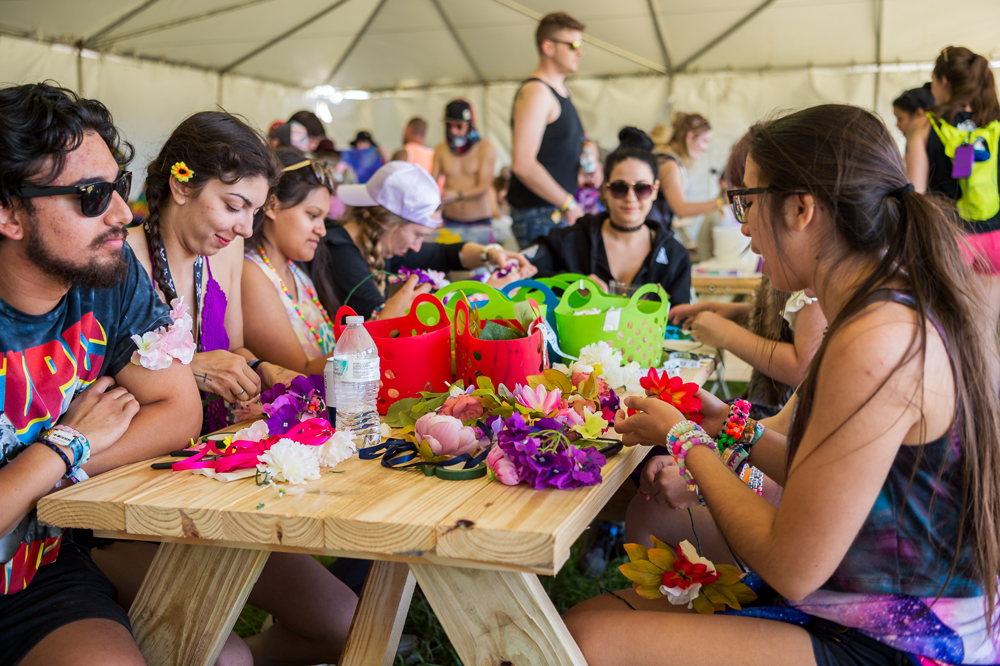 The gorgeous daylight sun brought the campsites together to throw down the gauntlet in head-to-head battles. Each campsite’s greatest knights took to the battlefield for archery tag and bubble soccer. For those not looking to battle, morning yoga and tie-dying were all available to keep campers entertained until the festival grounds opened. —Alexander Dias

Ren faire pros and ravers have a lot in common—mostly because, above all, they both understand that getting dressed up is part of the fun. Headliners found extra creative ways to bring the two worlds together, and the hybrid of these realms was everywhere we went. Renaissance garb meshed with rave chic for some beautiful and interesting outfits. —Alexander Dias 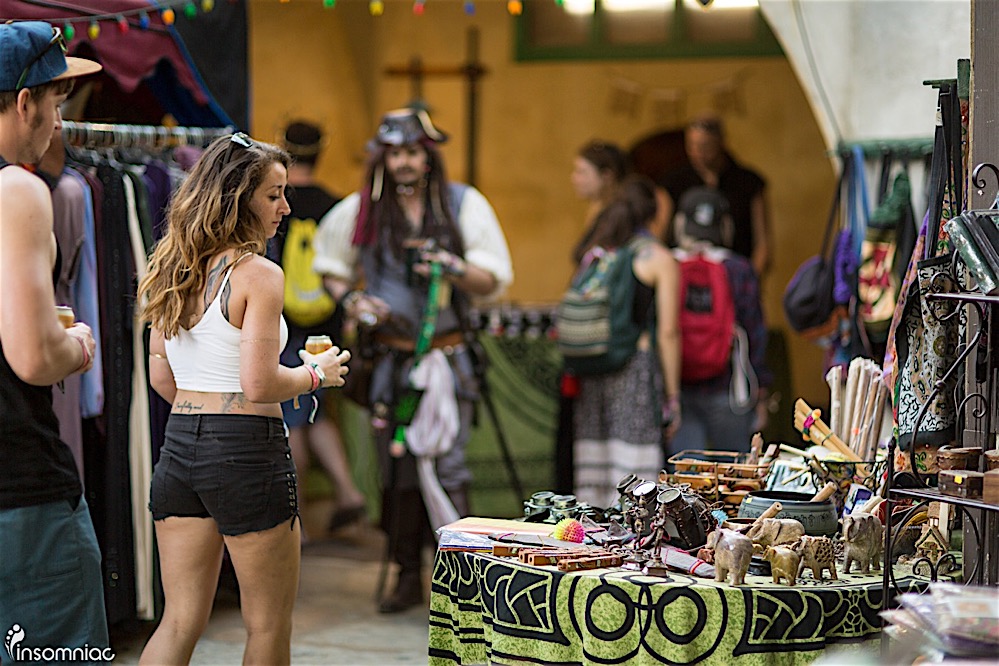 Forgot to pick up a costume ahead of time? It’s all gravy, baby: The Texas Renaissance Festival Fair Grounds has your back. Built into the architecture of the venue, these authentic shops offered intricate costumes and accessories that legit looked like the real deal. Need a realistic sword? Gotchu, fam. Shields? We have ’em galore. By the end of the day, ravers went full Renaissance, thanks to these local shops. And the vendors? Amazing folks who loved mingling with our Headliners. They welcomed us with open arms and made us feel at home in a land and time far away. —John Ochoa 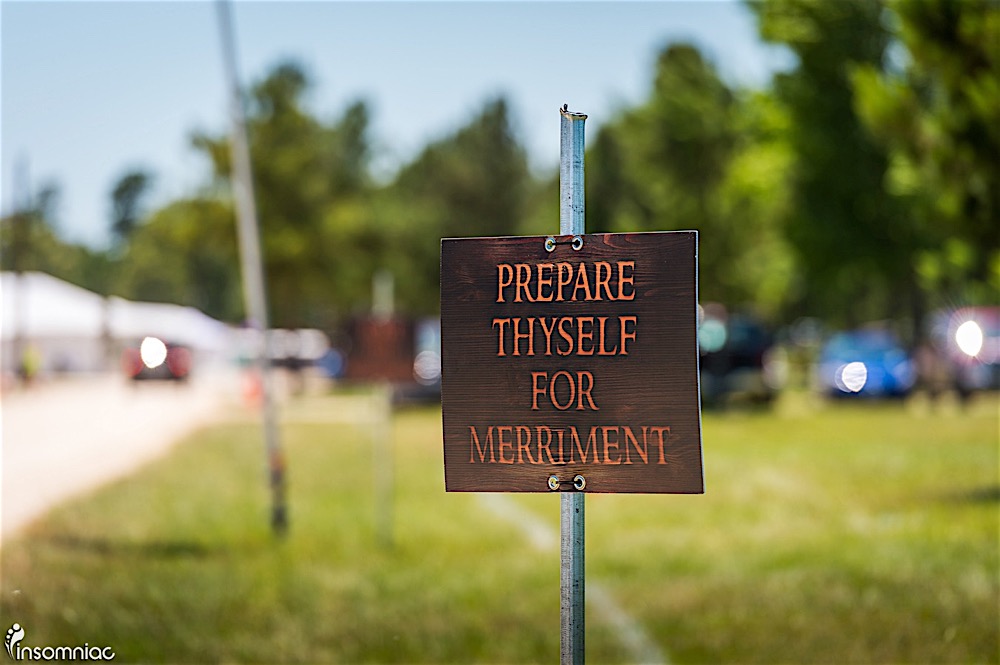 Ain’t nothing like a good pun to put a smile on your face and brighten your day. Mix in some olde English, and ye best believe you’ll be smirking from ear to ear. Puns are low-key lame and freaking awesome at the same time, and these little signs around the campground had us busting up every time we walked by. —John Ochoa 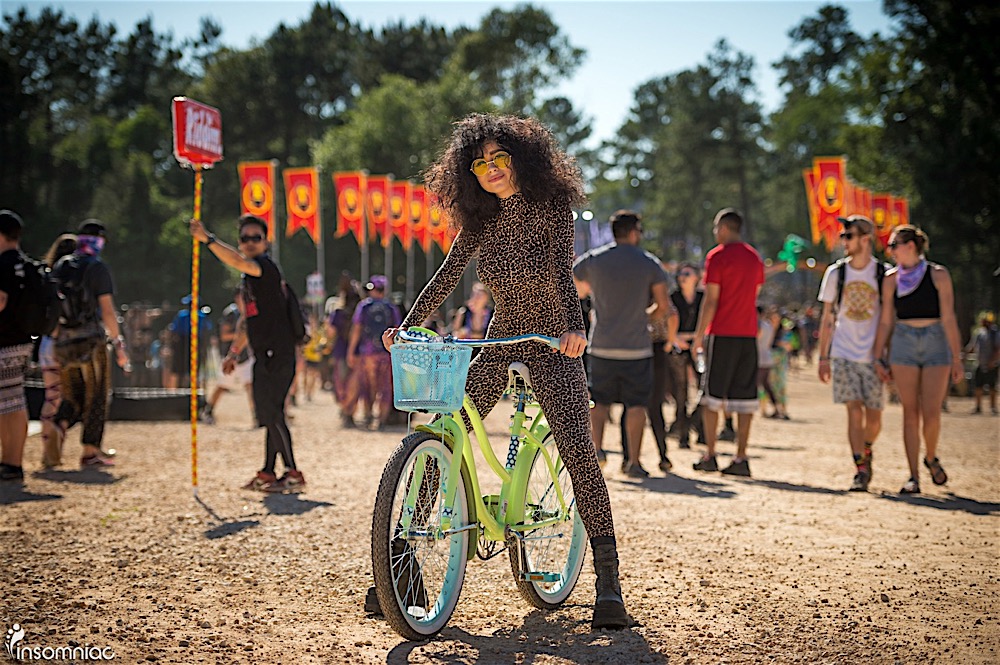 The Texas Renaissance Festival Fair Grounds is a massive site. The walk from the farthest edges of the campground to Conqueror’s Court and the festival grounds is a commitment and a half. Pro campers, many of whom had already been to the venue before, made sure to pack their bikes to make things a bit easier. Luckily for those who didn’t, there was a steady supply of pedicabs to help get groups from one side of the grounds to the other. Just don’t forget your bike next year; your feet will thank you for it. —Alexander Dias 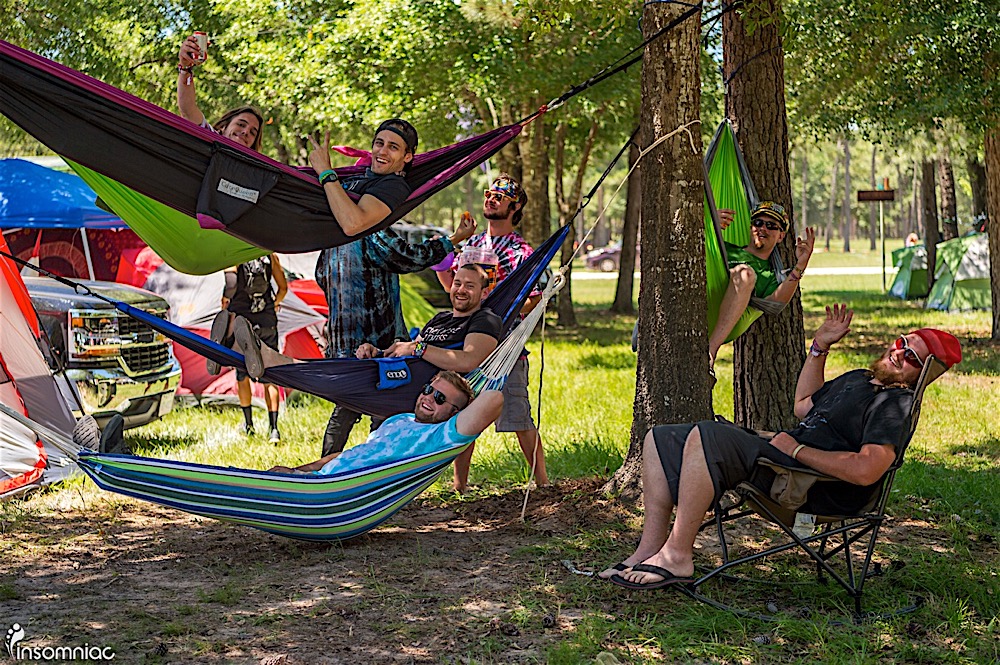 We’re all for taking a rest on the grass during the sundown golden hour, but Headliners upped their napping game when they busted out their hammocks over at Castle Northwoods. Chilling on a hammock at a music festival is the equivalent to floating in clouds with heaven’s choir as your backing track, especially when the live celestial sounds of Phantogram and Bonobo guide your way. Trees are our friends, and hammocks are essentially our way of giving them hugs. Expect hammocks to really take off at Middlelands. —John Ochoa

Turkey Legs Bigger Than Our Faces 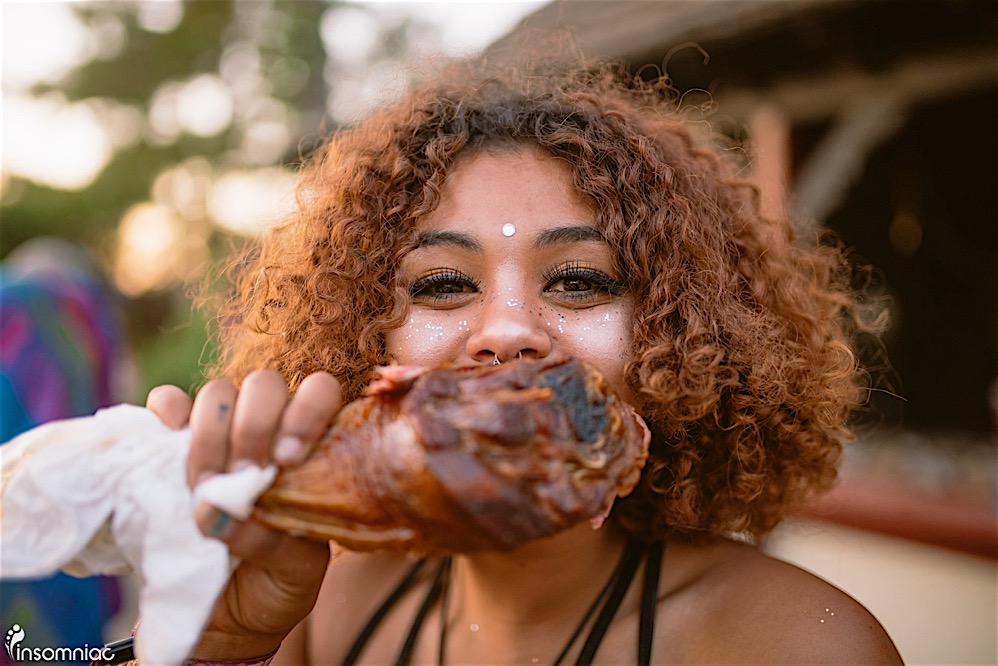 We had our fair share of BBQ here in Texas, the meat capital of the US, but we can’t deny it: The turkey legs were the food champs of the weekend. These giant slabs of meat, bigger than our faces, turned out to be the perfect festival protein re-up we needed after a day of dancing. We felt like true royalty stuffing these meat sticks into our faces, greasy hands and all. —John Ochoa 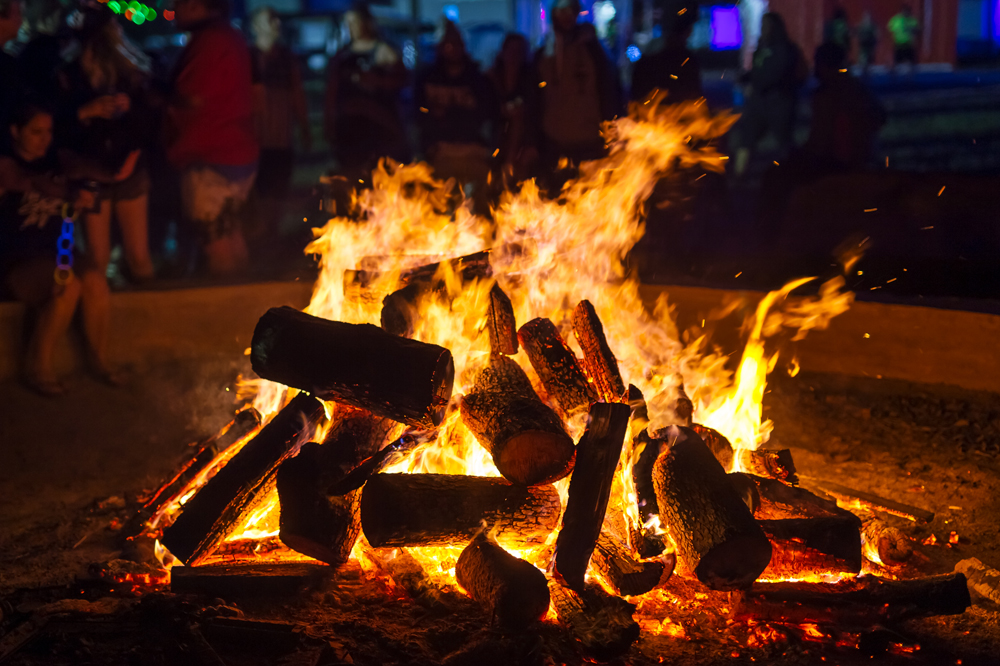 They say to never play with fire, but we bent the rules a bit in Middlelands. These fire dancers flowed with the elements with ease and grace, as if the burning-hot flames were an extension of their bodies. Over at the campground, the nightly bonfires closed out each festival day with a much-needed chill-out session powered by Mother Nature herself. —John Ochoa

Vibing Out to Phantogram 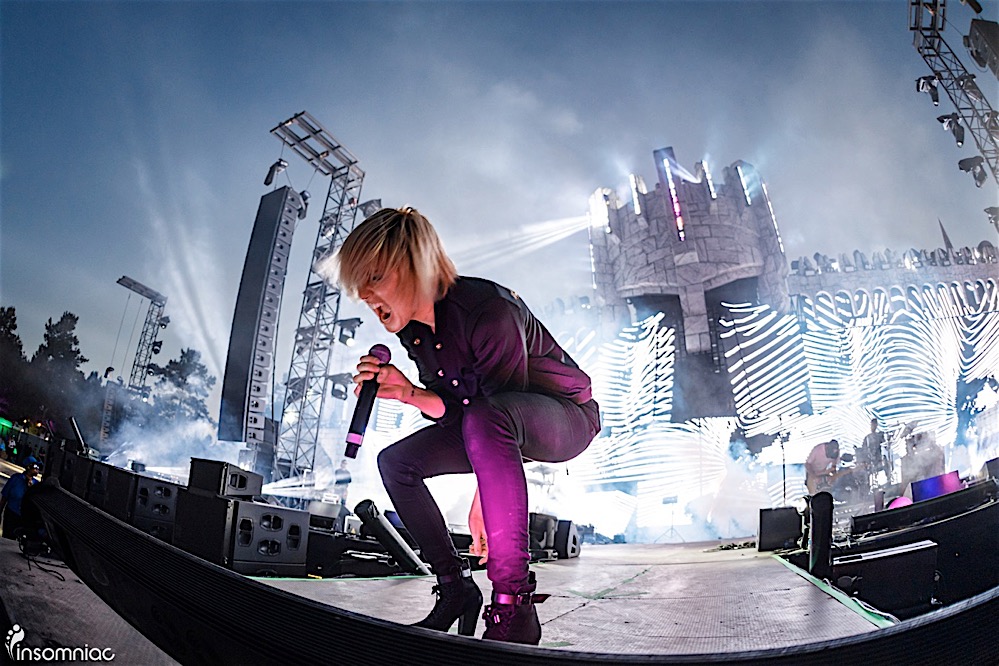 Playing at sunset requires an artist to capture the emotions of such a beautiful moment. Phantogram rose to the occasion on Friday night with a soaring set that established the tone for the first night of the festival. The duo’s deeply emotive and melodic music soothed the crowd and offered a momentary break from the heavy beats that largely captured Castle Northwoods throughout the weekend. —Alexander Dias 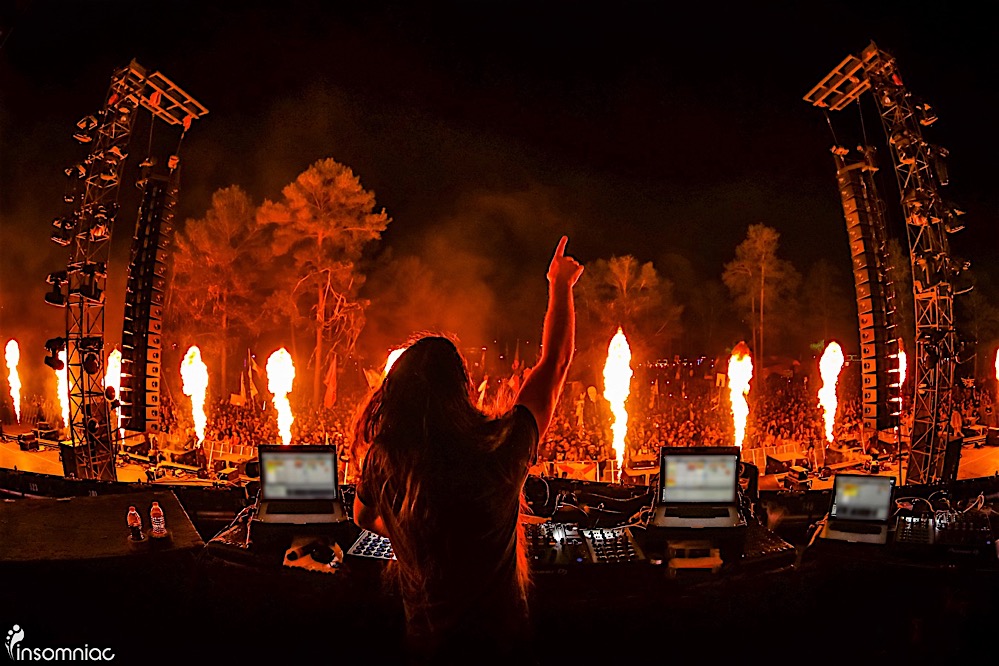 Bassnectar is like the Grateful Dead of bass music, with a ravenous fan base that follows him from show to show. His hotly anticipated closing set Saturday night shook the towers of Castle Northwoods. His custom visuals on the 3D-mapped walls of the massive castle provided the perfect backdrop for a sea of headbangers to experience the king of grimey bass-drop science. —Alexander Dias

Swagging Out With Rich Chigga 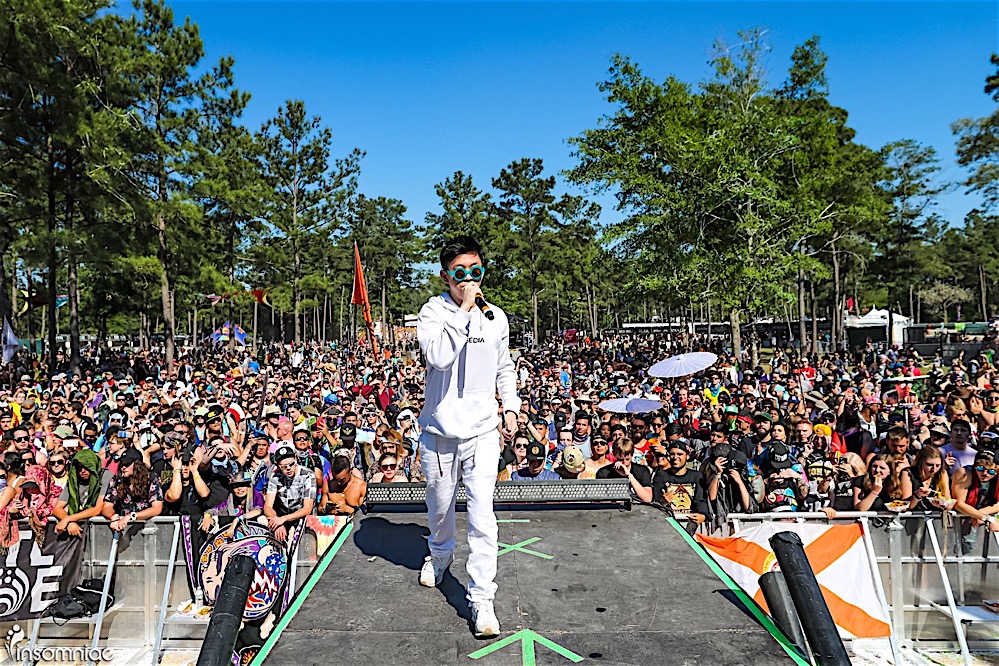 Despite an early set time, fans of internet sensation Rich Chigga turned out to turn up for the 17-year-old rapper, who is currently on his very first US tour. Dressed in white from head to toe, his gansta swagger was on full display as he dropped bars from his hit tunes “Dat $tick” and “Who Dat Be.” He even gave the crowd a preview of some yet-to-be-released music. As his set wound down, one of the Headliners shouted that they liked his sunglasses. Rich responded by taking them off and handing them to him. It’s this connection to his fans that makes the youngster a class act. —Alexander Dias

Throwing Down With Kristian Nairn AKA Hodor 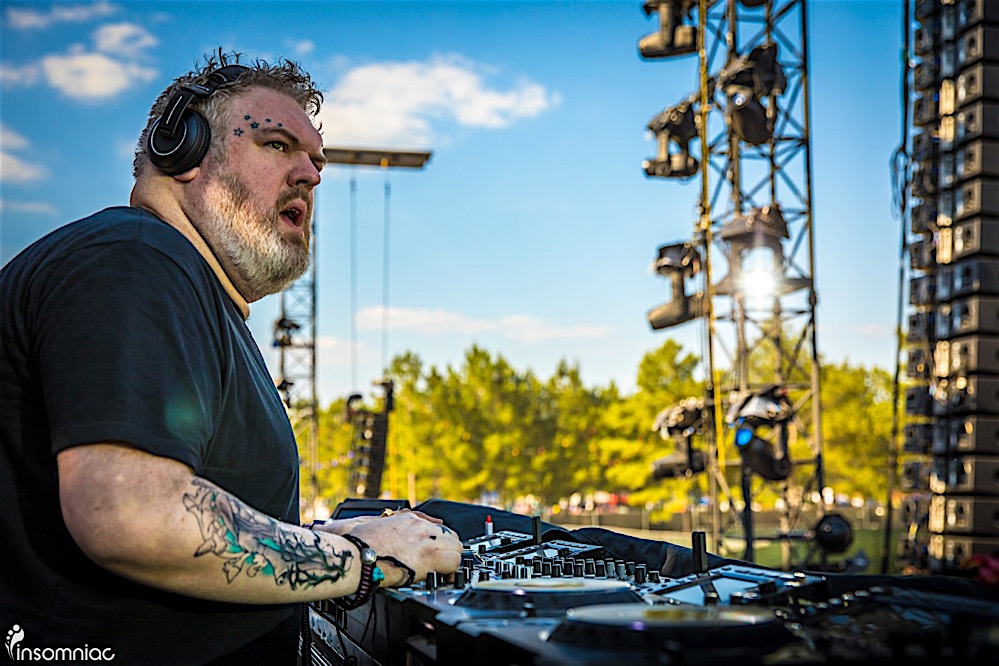 Given the theme of Middlelands, and the fact that it may or may not have been inspired by binge-watching entire seasons of Game of Thrones, we couldn’t kick off our Renaissance rave without Kristian Nairn, aka Hodor, getting medieval on the decks. He held it down as a professional DJ long before he held the door on GoT, and his disco-tinged, bass-forward house was the perfect way to get the Sunday-funday groove going for the final day of Middlelands. There was something fitting about seeing him wrecking shop in the shadow of Castle Northwoods. —Alexander Dias 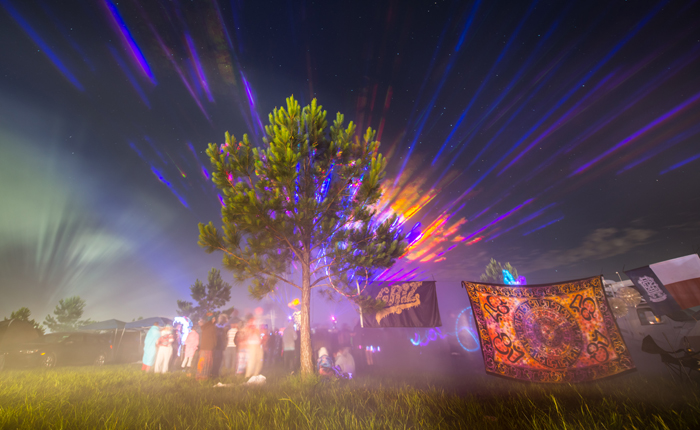 The Writer’s Tale: A Pilgrimage Through the Campground and Sound Camps at Middlelands